How many Donnies are there?

In Tony Bacon’s “The Ibanez Electric Guitar Book”, Joe Satriani is quoted as saying that Hunt painted hundreds of Donnies. In an interview with Vintage Guitar, Satriani put the figure at 300. With no official count coming from Hoshino, the only other evidence comes from the serial numbers of the models that have been identified. These tell a story of a much smaller number. Rich Harris at Ibanez Rules, who has more Donnies in his collection than anyone else, estimates that the number is actually likely to be between 50 and 60.

What happened to Donnie F?

Donnie F was the main Donnie that Joe Satriani used on stage. It was stolen in San Rafael, California, in 2000.

A police case was opened and a reward offered, but Donnie F and one of Joe’s JS5’s remains missing.

Why are there 5 Donnies attributed to Joe Satriani, when he’s stated he had 4?

Donnie F, Pink Donnie and Blue Donnie all appear among Joe’s gear list on his website in the late 90’s. 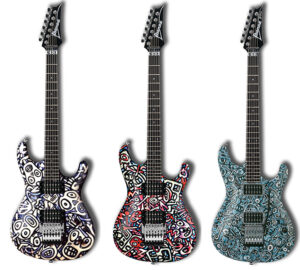 In an interview with Vintage Guitar magazine, Joe also said that he owned these two, so until we get clarification, we’re sticking to 5. 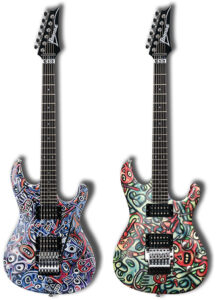 Where can I find information on Donnie Hunt’s other work?

Donnie Hunt created a wide variety of artwork including paintings, sculptures, clothing and furniture. Jamie Grant has created a Homage to Donnie Hunt on Instagram.

Check it out for lots of examples of Hunt’s wider work:  @ibanezjs3

How did you process the Donnie images?

The images came from multiple sources, and the photos were taken at a variety of angles and at different resolutions. The intention was to focus on Hunt’s artwork, so we tried to bring them into a consistent format and tidy them up as best we could. Obviously with a low resolution image, there’s only so far you can go, so some of the images are quite poor, but in all cases we were able to tidy up the non-Donnie elements (neck, knobs, pickups) which would otherwise be quite distracting, leaving us with an idea of how the guitar would have looked when it was new.

All of the images were imported into Photoshop and processed against a standard template to ensure that they were consistent. As appropriate they were de-noised, saturated, warped, scaled and sharpened. We applied subtle shading and highlights to help emphasise the 3D nature of the guitar.

What are the Ed Roman copies? 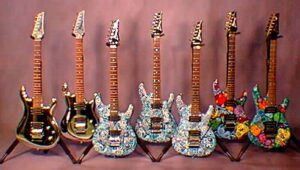 Ed Roman’s guitar shop in Las Vegas had a custom painting department which would do copies of guitars. They hired an artist to make copies of the Donnies that they had in the store. Quite how this was tolerated by Ibanez and did not result in a lawsuit is a mystery. (Several other guitar companies sued).

The small image to the right shows a collection of Ed Roman guitars, including three blue Donnies. One of these may be the original (#26), or they may be three copies. The two guitars on the far right are painted in a Donnie style, but are not based on an original.

Are there any other replicas?

Yes. Since Donnie Hunt’s death, several artists have painted guitars in a Donnie style. Some of these guitars are close replicas and others are tributes that are clearly not intended to be mistaken for Donnies, but are in a Donnie Hunt style. Often the base guitar used will be a JS1000, JS1200 or JS100.

The leading figure in this field is Raven Neale, based in Melbourne, Australia. Raven has painted several replicas of Joe Satriani’s Donnies for his customers. Raven also produces original designs in a Donnie Hunt style.

Some examples of replicas and tributes are shown below.

How can I identify an original? 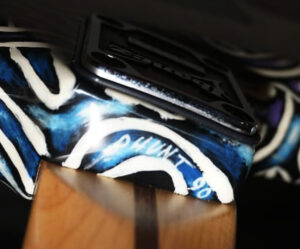 Donnie Hunt used to sign his guitars at the neck joint as shown here, and in the trem cavity. To the best of our knowledge, none of the artists that have painted replicas have forged his signature. They are making replicas which can be identified as replicas. They are not making forgeries.

Finally there is the visual test. You can study the individual models in our model list and start to recognise Donnie Hunt’s style. You’ll notice that most Donnies have a very “busy” design with lots of overlapping motifs. Many replicas don’t go to the same level of detail.